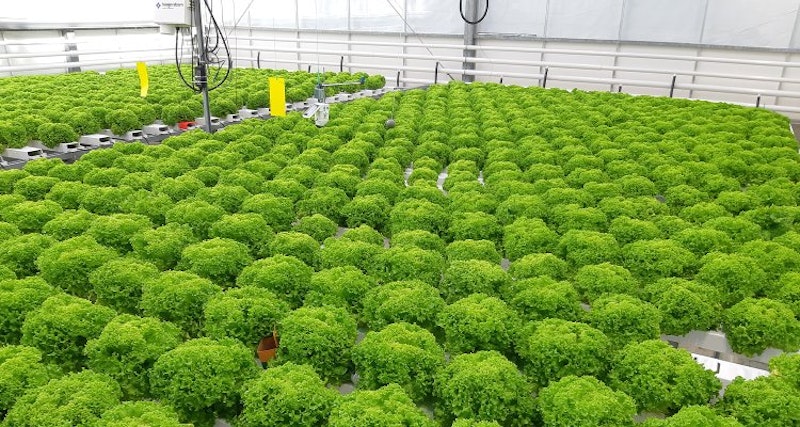 The five international teams participating in the final rounds of the 3rd Autonomous Greenhouse Challenge have completed the first try-out experiment. The teams tested their algorithms and gained experience during a first crop cycle with lettuce. The goal of the 3rd Autonomous Greenhouse Challenge is to grow lettuces in two crop cycli fully autonomously with an AI algorithm on a cloud platform with good quality and little resource and energy use and without any human interference in the experimental greenhouses of Wageningen University & Research (WUR) in Bleiswijk.
The first crop cycle of the 3rd Autonomous Greenhouse Challenge started on February 2nd with the planting of cultivar Salanova. Five teams (Team CVA, Team digital_cucumber, Team MondayLettuce, Team VeggieMight, Team Koala) participated in the first try-out experiment to test their algorithms and gain experience. The reference greenhouse was operated by WUR organisers. The goal was to maximize net profit of the lettuce cultivation.
Each team had a 96 m2 compartment at its disposal in the high-tech greenhouses of WUR with standard climate sensors and equipment. The teams' algorithms had to determine the set points for temperature, amount of daylight and artificial light, heating, CO2 concentration and cultivation-related parameters such as crop density. Vision technology provided the teams with on-line status information. The teams' algorithms were mounted on a virtual machine on a protected WUR server. Data from the greenhouse is received via a digital interface from LetsGrow and Azure Cloud. At the same time, the algorithms autonomously send setpoints back to the process computer, which ultimately takes the action on climate control in the experimental greenhouse. For further information see the IDTechEx report on Agricultural Robotics Market 2022-2032.
Teams followed different climate strategies, varying in temperature, assimilation, additional LED-light and CO2 application. This resulted in different growth duration, use of resources and lettuce head weights. For example, average temperature varied between 18.9 and 21.9 degrees Celsius, and daily amounts of PAR light varied between 9.1 and 16.3 mol/m2/day. Also crop spacing strategies varied, resulting in average plant densities from 24 to 38 plants/m2. As a result, growth duration varied: dates of harvest ranged from March 10 to March 21, and average plant weight at harvest varied from 138 to 320 g.
Apart from the weight, the quality of the lettuce head is important to determine the price. Lettuce heads were classified in three categories: class A for lettuce heads heavier than 245 g, class B for lettuce heads between 220 and 245 g, and class C for lettuce heads lighter than 220 g and/or with poor quality such as tip burnoforbotrytis. For some teams, tip burn and botrytis were very severe. The experiments showed that high radiation and temperature levels were associated with high levels of tip burn.
The reference crop was cultivated at a relatively low temperature (18 degrees Celsius) and low PAR levels (9.1 mol/m2/d) which resulted in very low levels of tip burn and no botrytis. However, it did not have the highest amount of class A lettuces and the growth duration was longer to reach the target lettuce weight (until 15 March). But, the reference was grown with a relatively low lighting intensity and a relatively low heating input, which resulted in the lowest electricity and consumption and costs.
The autonomous grown lettuces reached the desired lettuce weight with up to 3 times higher electricity costs, most of them also with higher heating costs. In the first try-out round teams did not yet succeed in realizing a positive net profit due to either lettuce quality issues or high amount of resource use.
What has been achieved? All teams could gain experience with growing lettuce autonomously. Teams' AI algorithms were able to determine setpoints and to control the lettuce cultivation. The realized controls, the crop and climate measurements have generated very valuable datasets and learning outcomes that the teams can use in the refinement of their algorithms. Data from all compartments will be used by WUR providing an updated computer simulation environment of greenhouse and crop to the teams in order to train and refine their algorithms during the next weeks.
The final crop cycle will start May 2. The team reaching the highest net profit during that crop cycle crowns itself as winner.
Source and top image: Wageningen University & Research