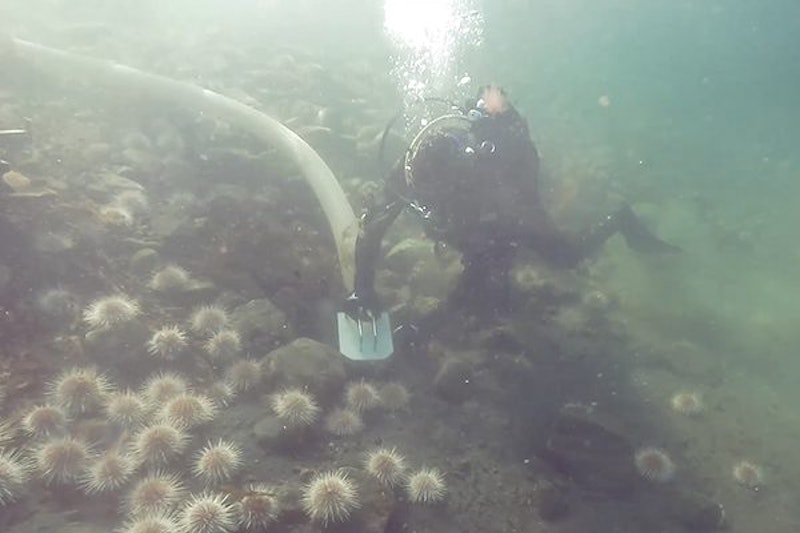 There's a new gadget on the market: a sea urchin vacuum. Presently, divers hand-pick sea urchins - a technique that's inefficient, expensive and presents safety risks to harvesters. Harvesting typically takes place in a late fall and winter fishery, which also presents environmental challenges to divers.
But that old-school method may soon change in Canada. The Canadian Centre for Fisheries Innovation (CCFI) has approved a project partnership with Miawpukek Horizon Maritime Services, an Indigenous business operating in Atlantic Canada, to test drive the novel C Robotics patented diver-assisted C Disc technology - a type of vacuum used by divers to collect sea urchins.
"It's four or five times faster than hand collecting," said Richard MacLellan, general manager at Miawpukek Horizon Maritime Services. "That's going to save people money and make some fisheries more economically viable. And it's much safer."
Developed in Norway, the C Disc is a mobile and efficient diver-operated tool that can be used for harvesting various species from the seabed. The technology is designed to increase the catch rate, compared to traditional hand-picking by divers. With improved efficiency, the C Disc could help make sea urchin harvesting a sustainable and commercially viable venture in Newfoundland and Labrador. For further information see the IDTechEx report on Mobile Robotics in Logistics, Warehousing and Delivery 2022-2042.
"Currently, licenses in Canada are quite specific: You're allowed to hand harvest and that means pick up with your hand to put it in the bucket," said MacLellan. "The Miawpukek First Nation has a hand-harvest urchin license, but it's currently not harvested because it's not economically viable. They can't make money with the market prices and the amount of effort it takes a diver to go down there."
MacLellan has high hopes that the technology will turn the tide. The vacuum is easily deployed and powered from a small boat and can be configured in multiple ways for the highest possible dive-time efficiency. In difficult-to-access areas in very shallow water, the C Disc can be configured to give an extended outreach from a boat. While the diver is operating a suction nozzle that is suitable for the seabed conditions and the targeted species, the catch is collected in nets on the tool. The C Disc can also be configured to bring the catch directly up to the boat or can be deployed on land without a boat for near-shore work.
The C Disc has been tested by Norwegian Institute for Water Research (NIVA), and so far, the results from the trial indicate its efficiency for vacuuming sea urchins. In a commercial setting, NIVA found that the CPUE (catch rate) is higher than other methods used for collecting sea urchins, such as trapping and drag dredging, with the average catch rate at 1.9 sea urchins per second.
As a tool for promoting kelp recovery by removing sea urchins, the technology was able to remove sea urchins to a low number, depending on substrate type, and there did not appear to inflict much damage on bycatch or the urchins.
"Encrusting and fastening organisms appeared to be less affected by the C Disc and despite being the dominant bycatch, there appeared to be only a slight removal of the dominant snails/hermit crabs," C Robotics detailed on its website. "The advantage of the C Disc is that the diver is able to see, and to some degree, avoid catching large organisms such as sea cucumbers. The suction handle made it easier to maneuver in between rocks and avoid unwanted bycatch."
As for what's next, the Miawpukek Horizon Maritime Services will carry out trials to get the green light from Fisheries and Oceans Canada (DFO) to use the technology.
"One (trial) is a comparison of the efficacy between a traditional hand harvest with a scuba diver and an assisted C Disc," said MacLellan. "The big regulatory questions are proving the safety of the operation - that the hose and such don't damage things."
Overall, the goal is to "prove the safety, environmental sensitivity and efficacy of the new approach. "It will also include an assessment of the quality and size selectivity of harvests, and focus on "proving the quality of the catch."
"The processors are interested because there is a premium paid for hand-harvested urchins," said MacLellan. "If we can demonstrate that the quality is better than the more invasive way of harvesting, (that helps) the economics on the solutions."
MacLellan anticipates the trials to be wrapped up by May 2022 and remains confident that the results will address any unanswered questions. Once the approval process is complete, the focus will shift onto rolling out a sea urchin vacuuming service, starting with staff training and recruitment.
"I expect we'll get approval," he said. "Those questions have been answered in Norway over the last couple of years already."
Source and top image: Global Seafood Alliance